Big data: this is what the insurance industry can learn from Formula 1

Hundreds of sensors on a Formula 1 race car pump an impressive amount of data through to the team during training sessions and races. The collected data is phenomenally important in a world where the differences – especially between the top teams – are extremely small. During a race, everything has to be analysed in real-time. In Formula 1, they found out years ago that data can make all the difference between winning and losing.

What has this got to do with the insurance market? Just like in Formula 1, insurers have enormous volumes of data at their disposal. Real-time insights, straight-through processing, and rapid decision-making are an important part of this. Speed and accuracy supported by artificial intelligence are important competitive weapons for insurers. Especially when it comes to underwriting, pricing, claims handling, and fraud detection. The question is: what can insurers learn from data analysis in Formula 1?

Matt Cadieux, the CIO of Red Bull Racing, said in an interview that no less than 30,000 changes are made to a car during a season in order to optimise it. These changes are all based on insights gained from data. It is a development that former world champion Sebastian Vettel is not happy about. According to him, telemetry (remote measurement and data analysis) now has a much too dominant role in the sport. In the past, if a driver got through a corner quicker because he knew the best line to take, then he would have an advantage throughout the entire weekend. Nowadays, there is so much data available, the engineers can tell the other drivers what the best line is. In other words, the computer knows how to handle the corners better than the drivers simply by analysing all the data.

The growing role of data in decision-making is an irreversible development. A perfect example of this was the victory of Max Verstappen at Interlagos in the autumn of 2019. The Red Bull Racing team boss sent Hannah Schmitz up on the podium together with Verstappen after the race. Some commentators jokingly referred to her as the ‘data girl’. In reality, this ‘Senior Strategy Engineer’ had played a crucial role in Verstappen’s victory by recommending an extra pit stop for new tyres towards the end of the race during a safety car situation. It seemed to be a big gamble: the pit stop meant Verstappen gave up the lead to Lewis Hamilton. However, with the fresher tyres, the Dutchman was able to quickly catch up and overtake the six-time world champion in the final laps.

When the safety car flag came out, though, Schmitz only had a couple of seconds to make a decision. But as a data analyst she was prepared for the situation, amongst other things because the team had worked out hundreds of scenarios beforehand, and because she could take a calculated decision based on the real-time data. These types of data-driven decisions are therefore a major competitive weapon in the world of Formula 1, and it means the team managers have a somewhat different role: the computer has replaced their intuition and experience. Or at least some of it. 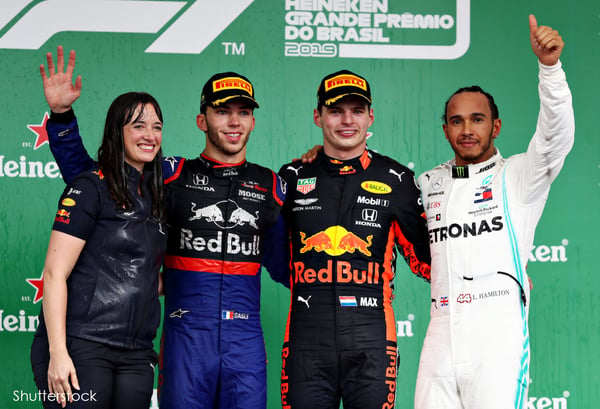 Insurers are also taking more and more (real-time) decisions based on data. This includes, for example, decisions about dynamic pricing, automated underwriting, and claims handling. The potential of data is enormous. For example, you can use data to gain insight into customer turnover, the embedded value of insurance policies, and the potential for cross-selling. These insights enable insurers to take better decisions about such issues as the allocation of capital and (customised) activities in the field of sales, marketing, and customer experience.

Nonetheless, many insurers struggle to work in a data-driven way. The question is: why? Formula 1 teams are ‘data mature’, which means they understand the important role that data can play in winning races, while insurance companies are still just getting to grips with the digital age.

What many people fail to realise nowadays is that data is essentially a by-product for insurance companies. An insurance company has a social function which is based on the principle of solidarity. Data was therefore not seen as a tool that could be used to increase turnover or to improve the customer experience. That is why data is often not handled in the right way. However, keeping in mind the solidarity principle, insurers are now working hard to work in a more data-driven way. While some existing insurance companies are finding it hard to make this transformation (due to outdated systems and poor data collection), newcomers like Lemonade have hit the ground running. They are not weighed down by ‘legacy’ systems and methods, and see data as a ‘way to win races’. Lemonade is perhaps the most well-known example, but there are plenty of other start-ups that are better in data analysis than many traditional insurance companies. That might not make a big difference (in turnover) today, but in the future data will definitely create a decisive competitive advantage.

Decisions are increasingly the result of data analysis and people only play a marginal role in the process. Or at least a different role: there is a new reality in the taking of decisions. If you look at the facts objectively, you can see that people are no match for computers, because computers can handle a lot more complexity. Furthermore, people tend to have subjective biases, so from a scientific point of view, you can ask yourself how good human decisions really are. Research has found, namely, that most of our decisions are not even formed consciously, but based on subconscious thought processes. So the conclusion is very simple: computers make better decisions than people.

Within this development lies an important message for (the management of) insurance companies. They should not get carried away by the latest technological hypes, but instead focus on working out how they can take better decisions at every level and in every imaginable position within the organisation. And they need to recognise that even the best manager needs to put their human intuition and experience aside sometimes and follow the computer. Just like Formula 1 drivers have to admit now and then that a ‘data girl’ knows more than they do.

Read more about this topic

eBook - Winning with a data-driven strategy